What else you should know about the human eye

Posted on September 2, 2011 by Lionel Barrow

We had an incredible response to our blog post on the human eye a few weeks ago; many commentators asked if we had a few more facts floating around that we could share. As it turns out, we do. Here are two more general findings from eye-tracking that everyone — designers, engineers, hackers in general — should know.

A few years ago, the eye-tracking world stumbled upon one of its most consistent results: people respond to text-heavy websites with an F-shaped heuristic. First, they look at the top-left of the website and read the first line of content text. Then, they scan the second line of text. Finally, they glance down the left column, reading a little of each line as they go. Users read much less text as they move down the page; a great summary of this behavior was written by Jakob Nielsen in a 2006 blog post.

This finding is probably familiar to anyone who’s studied usability; just image search “SERP eyetracking” for a few dozen heatmaps showing this effect on Search Engine Results Pages. However, it’s worth restating this pattern because it’s very robust. As we wrote about a few weeks ago, GazeHawk has found evidence that the first component of the F-pattern — shifting your eyes up and left towards the top of the screen — is almost universal across web pages: regardless of what web page you’re on, you probably look at the top-left of the site first.

What this means to you: Most of your users will only read the first few sentences on your page. Those sentences must have an impact. 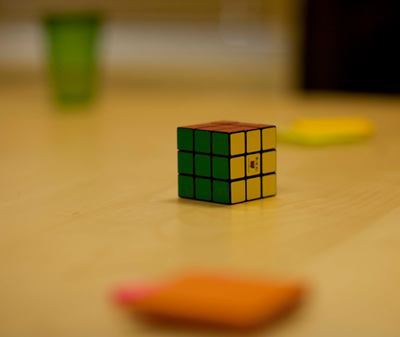 GazeHawk's Owen Byrne took this photo with a deliberately low depth of field.

In photography, a camera is said to have a high depth-of-field if the sharpness of the image drops off slowly as you look away from the focus of the camera. Like anything with a lens, the human eye has a depth-of-field (a particularly low one actually). Contrary to what you might think, our biology deliberately increases this effect, rather than trying to counter-balance it, by concentrating the distribution of cones in the center of the retina in a region called the fovea centralis. We really cannot see very well at the edges of our vision.

To a certain extent, the brain masks the severity of this effect from our conscious perception of the world. If you look out of the corner of your eye, the world doesn’t look warped or distorted. It just looks fuzzy. If you wanted to look at something specific, you’d just train your eyes on it. (The average duration of a saccade, the technical term for the rapid shifting of the gaze from one region to another, is about 200 ms. The eye is very good at rapid movement.) But the eye’s emphasis on looking at a specific focus and rapidly moving between foci has a price: we find it difficult to look at two things at once.

This finding is confirmed by eye tracking studies, which represent the focus of the human gaze with a single point. This approach wouldn’t work well if people paid a lot of attention to the parts of their vision outside their focus. Humans have binocular vision: both eyes are used together. This is opposed to monocular vision, found in prey animals, where the eyes move separately. If we eye tracked pigeons, we’d need two points to represent where they were looking.

What this means to you: People hate being forced to split their attention between multiple places on a page. Arrange pages so that elements related to a single task are close together.

That's it for this week. We have a few more articles on the horizon — we’ve been investigating how giving users a specific task affects their browsing habits when compared to ‘free’ browsing. However, we’d like some community input on the topic of our next few blog posts. If you could use eye tracking to study something, what would it be? What question would you want to answer?